What is Li-Fi and how does it work?

In most simple terms, Li-Fi (Light Fidelity) is a way of wirelessly transmitting data through visible light. Unlike Wi-fi, which uses uses radio waves for transmission, Li-fi utilises light waves, which presents a number of key benefits:

Of course, Li-fi also has some disadvantages over Wi-fi, namely the fact it only works when the lights are turned on, which limits outdoor and night time usage. Also, the fact that light cannot pass through walls may be good for security, but it also limits the effectiveness of Li-fi in spaces that have lots of physical barriers. 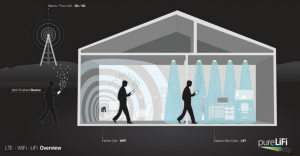 Li-fi in action, via purelifi.com

The unique nature of Li-fi technology makes it particularly suitable for a variety of applications, both in domestic and commercial environments. For example:

Li-fi may not have gone mainstream yet, but there’s already plenty of businesses looking to this technology as a way of improving day-to-day efficiencies and customer experiences. One such example is the Best Western hotel chain, which put Li-fi front and centre in its ‘hotel rooms of the future’ event.

Speaking after the event, Best Western GB’s CEO Richard Lewis said, “LiFi is the future for the hospitality industry therefore we are delighted to showcase it for the first time”. As owners of hotels, bars, restaurants and other hospitality establishments seek to provide better experiences for their guests, and appease an increasingly mobile-centric population, emerging technologies such as Li-fi will become more and more important.

Whether Li-fi lives up to the hype is yet to be seen, but there’s no denying that this exciting new technology could be a huge game changer in a number of industries, as well as within the home. For more information about Li-fi and its applications check out www.lifi-centre.com.

Planning Office Lighting and How to Make Yours More Productive

The correct office lighting is a key component to creating bright and efficient workspaces. Get it right and things like work fatigue will be reduced while the performance and well-being [...]